<< BACK TO EXPERIENCE EXCHANGE BLOG 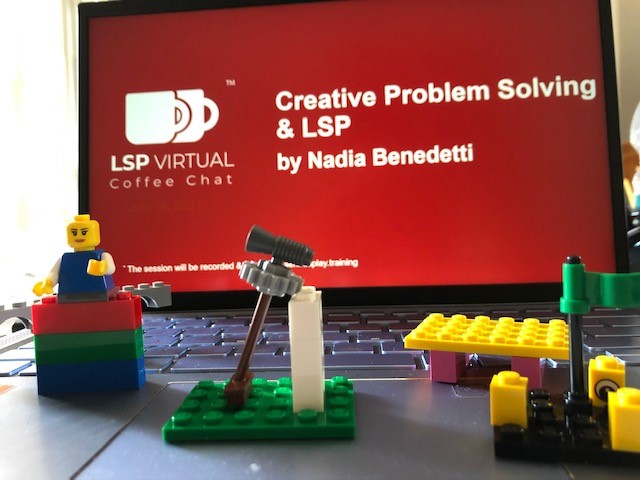 How do you nurture your imagination in your everyday life?

This was the starting point of our last Community Coffee Chat on July 20, when facilitators from 15 countries reflected together on the role of imagination in problem-solving. After a presentation of imagination and creativity, we experimented using the LSP techniques to push the imagination in ideas generation.

Life is a matter of imagination

Why imagination is so important in everyday life?

Some people may think it is for children, and that it is unuseful in a professional context.

On the contrary, imagination is the skill that differentiates human beings from most creatures.

According to Yuval Noah Harari  (Ph.D. History): « Seventy thousand years ago, there were at least six different human species on earth. They were insignificant animals, whose ecological impact was less than that of fireflies or jellyfish. Today, there is only one human species left: Us. Homo sapiens”

Homo Sapiens was the only homo specimen whose brain developed the imagination faculty. This made a huge difference when the climate changed from ice age to interglacial age when steppes quickly disappeared and forests started raising from the ground.

Sapiens could imagine himself to hunt in the forest, even if he never did before. Homo of Neandertal could not and he disappeared.

Most of us underestimate the power of imagination because there is confusion about it. In everyday language, we mix and misuse the words fantasy, imagination, creativity, and innovation.

Imagination is the capability of anticipating before experience. It is the faculty of conceiving new realities in our mind, by matching experiences in a new way. The fruits of imagination are new ideas. The unicorn is a clear example of imagination.

In the ’50s Alex Osborn and Sidney Parnes formalized the way we apply creativity in the Creative Problem Solving Process. They were visionary men who understood that creativity was a key skill and that we can train it.

The process resumes in 4 steps: CLARIFICATION of the situation, IDEATION of possible solutions, SELECTION of the most innovative and effective one, IMPLEMENTATION in real life for a GO/No GO decision.

Today Creative Problem Solving process is hugely applied inside organizations, also in some of its derived forms, such as Design Thinking.

As LSP Facilitators we use LSP Techniques to facilitate problem-solving inside organizations. But how about Creative Problem Solving?

As a facilitator of both processes, I use LSP Techniques such as AT1 and AT3 for CLARIFICATION, SELECTION, and IMPLEMENTATION.

Since generating a huge quantity of ideas is a key point in IDEATION, I was convinced that using the Lego Bricks could slow the ideas generation process.

I never dared to try with my clients, using traditional methods like wording or post-it instead. As so, I was really happy to be able to explore the ideation phase with the help of the community, during the coffee chat.

We played two rounds of buildings with different ideation techniques. Our purpose was to understand if yes or no building with hands could slow down the ideation process, and eventually which technique could generate the most surprising buildings.

The experience was rich and most of the facilitators from 15 different countries shared their insights. What a benefit for me! I had a deeper understanding of the link between the methods.

The result was that for 75% of the participants the use of AT1 was beneficial to idea generation. 25% felt that constructing with bricks was slowing down their imagination of solutions.

We reflected that this is probably due to the creative style we have. We also considered that to push imagination, it is important to use bricks metaphorically, non to prototype the solutions.

I love this facilitators’ community

I thank the whole community for this gift: on top of the fact that I feel more confident now in propose LSP for Ideation, I now consider that taking part in the Coffee Chat format to exchange, create connections and explore new practices is a great part of my continuous training.

And of course, we had a lot of fun!